History of the Theatre

THE OPERA OF THE THREE “A”-S

NEW SOAR IN THE OPERA THEATRE 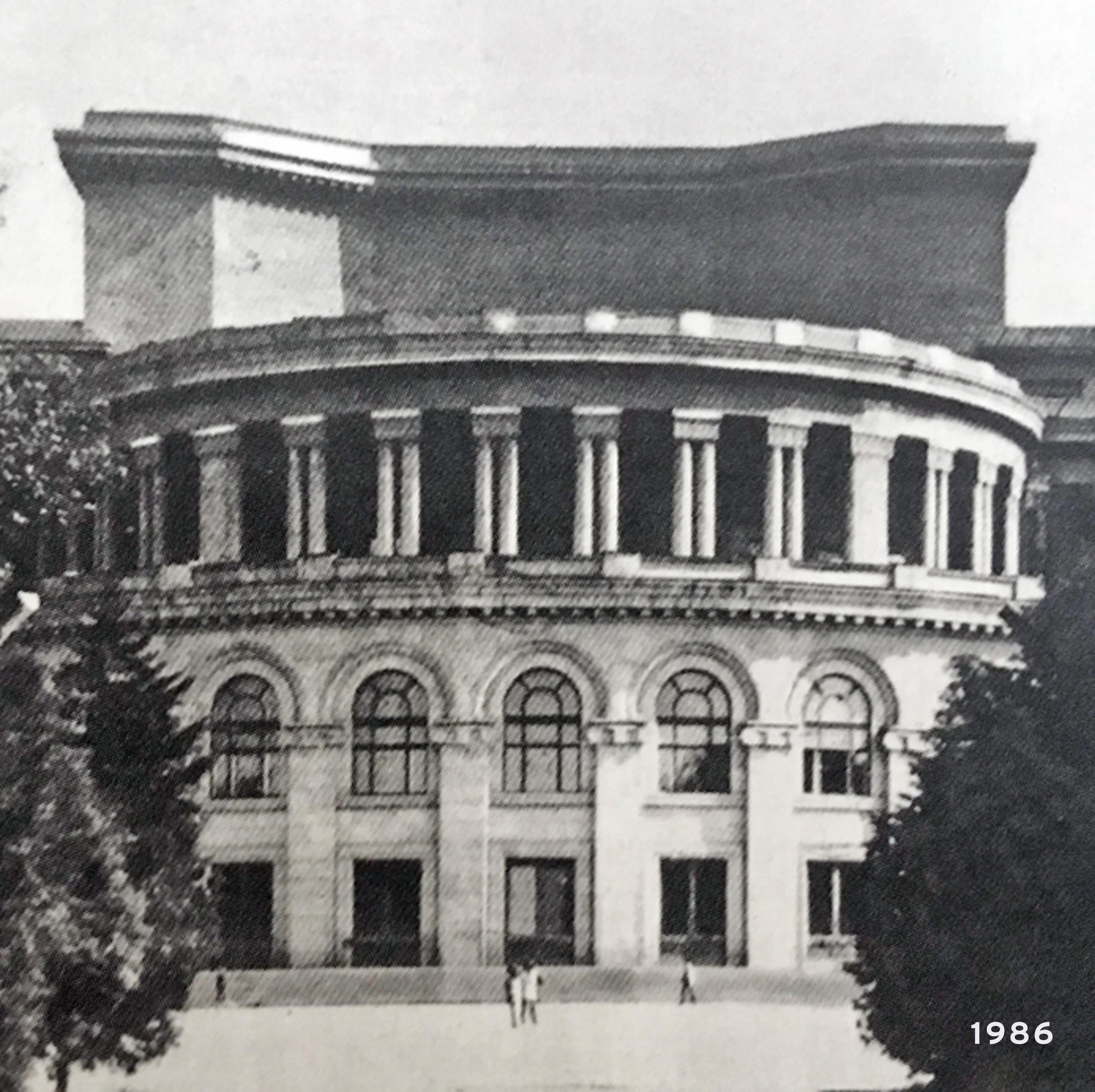 The Opera Theatre is located at the heart of the Armenian Capital city of Yerevan. It is not simply a cultural structure, but also an architectural masterpiece, the architect is world-renows Academician-architect Alexander Tamanyan. It is not coincidental at all that architect Tamanyan was honored the main prize in Paris in 1937, after having presented the Opera as an masterpiece. The theatre was founded during one of the worst periods of Armenian History. However, since the Armenians had the will to have an Opera, they were ready to surmount all forms of difficulties and hardships. It is from here that has risen rises every single of Armenia’s famous opera pieces, ballets, and colors from the stage. The newest cultural symbol of Armenia represents itself to us today in its complete form, with its classical beauty, grandiose stage, amphitheater with more than 1070 seats, as well as with its hallways.

THE OPERA OF THE THREE “A”-S 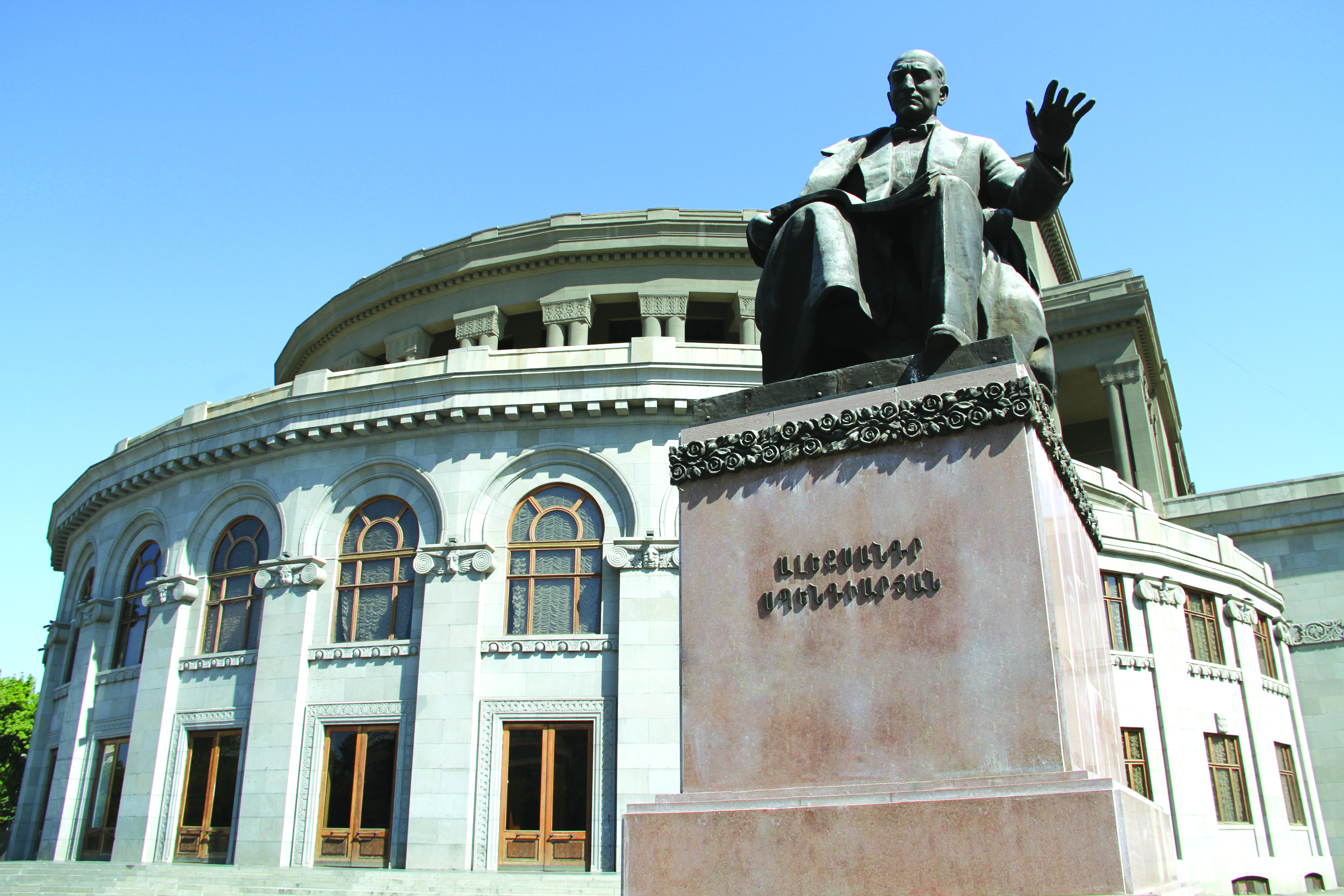 The curtains of Armenia’s Opera Theatre first opened on January the 20th of 1933. The Armenian people has had a theatrical history dating two millennia, but it only had the opportunity to form musical-theatrical environment at the beginning of the 20th century. Along with the the “A”-s` “Almast”, “Anoush” and “Arshak II”,the theater also became the main driving force for emerging composers. Here is where is assembled the Armenian Musical life. It has become, for more than 90 years, the glory of our musical culture, and for the foreigners an opportunity to visit Armenia. 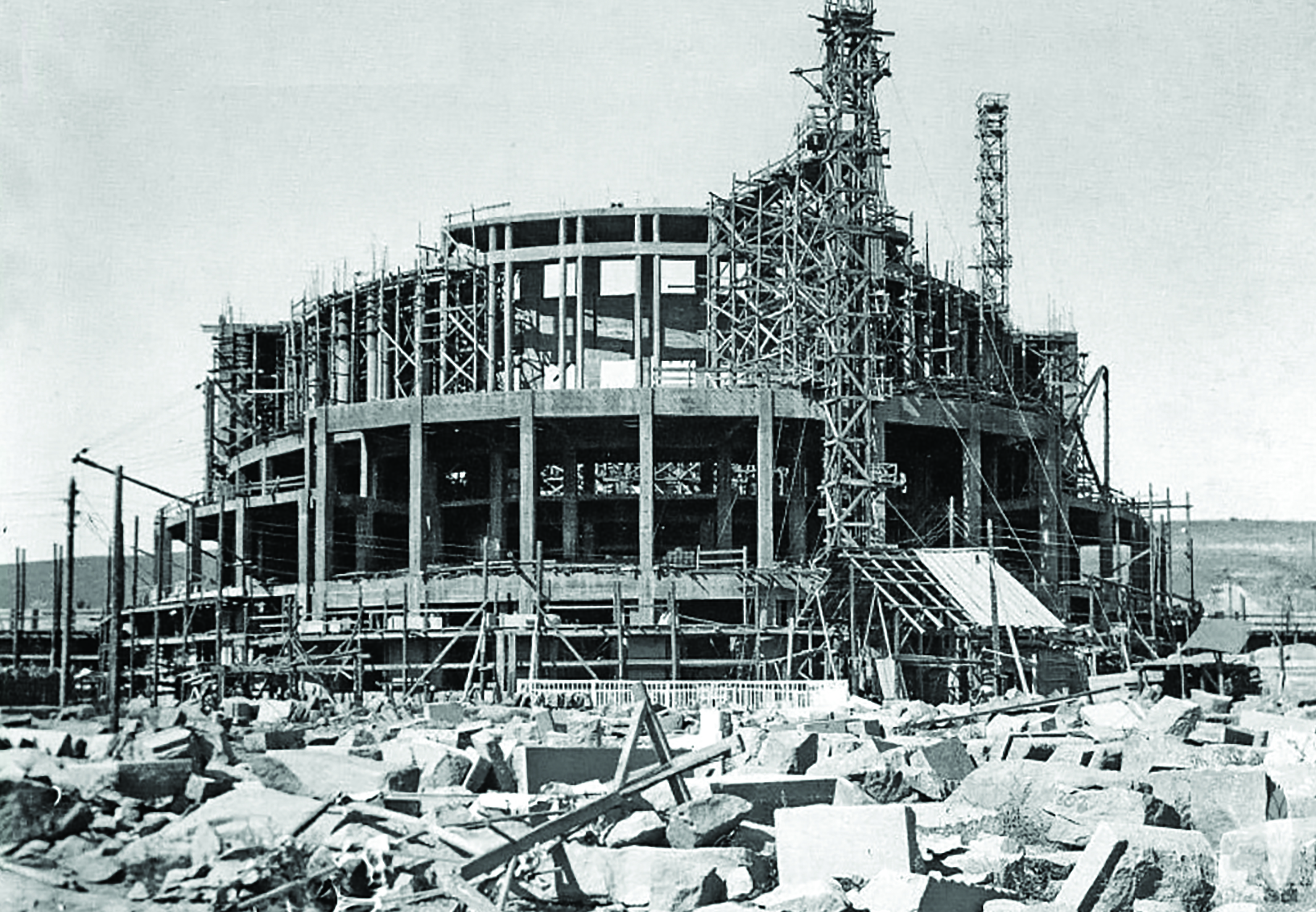 In 1927, the director of Yerevan’s State Conservatory A. Ter-Ghevondyan founds the first Opera Studio, which, composed of the choir, the symphonic orchestra and soloists, and in 1932, motivated by the founded studio, the Armenian Government decides and officially announces the founding of the Opera Theatre. It was opened on January 20th in 1933 with the A. Spendiaryan’s “Almast” opera’s presentation. With the initiation of composer Roman Melikian, for the first time in 1935, ArmenTigranyan’s “Anoush” Opera is played on stage.

From the first day of its foundation, Armenia’s National Opera theater’s creative staff became a prominent role in forming an environment based on theatrical and practical principles. And it is not coincidental that, having not completed its first decade of existence, the theatre already gained unprecedented success in Moscow` on stage of the Great Theatre, where for the first time during the Armenian Art and Literature Decameron was taking place in the Soviet Union, successful international and national classical plays and ballets, which were honered by official medals, awards and honors. The first one to be honored was Haykanush Danielyen, having been nominated People’s Artist of the USSR.

The Muscovite success was repreated in 1956 during the Second Armenian Art and Literature Decameron` this time being with the representation of the first National Opera “Arshak the Second”, which was already directed in 1945, accompanied by a young staff of musicians, composers, choir, with main composer being M. Tavrizyan.

It is worthy to remember the following composers as well: A.Katanyan, Yu. Davtyan, W.Charchoghlyan, M. Mkrtchyan, H. Terteryan, as well as soloists from the younger generation, M. Yerkat, E. Uzunyan, A. Karapetyan, E. Chakhoyan, M. Martirosyan and many many more. 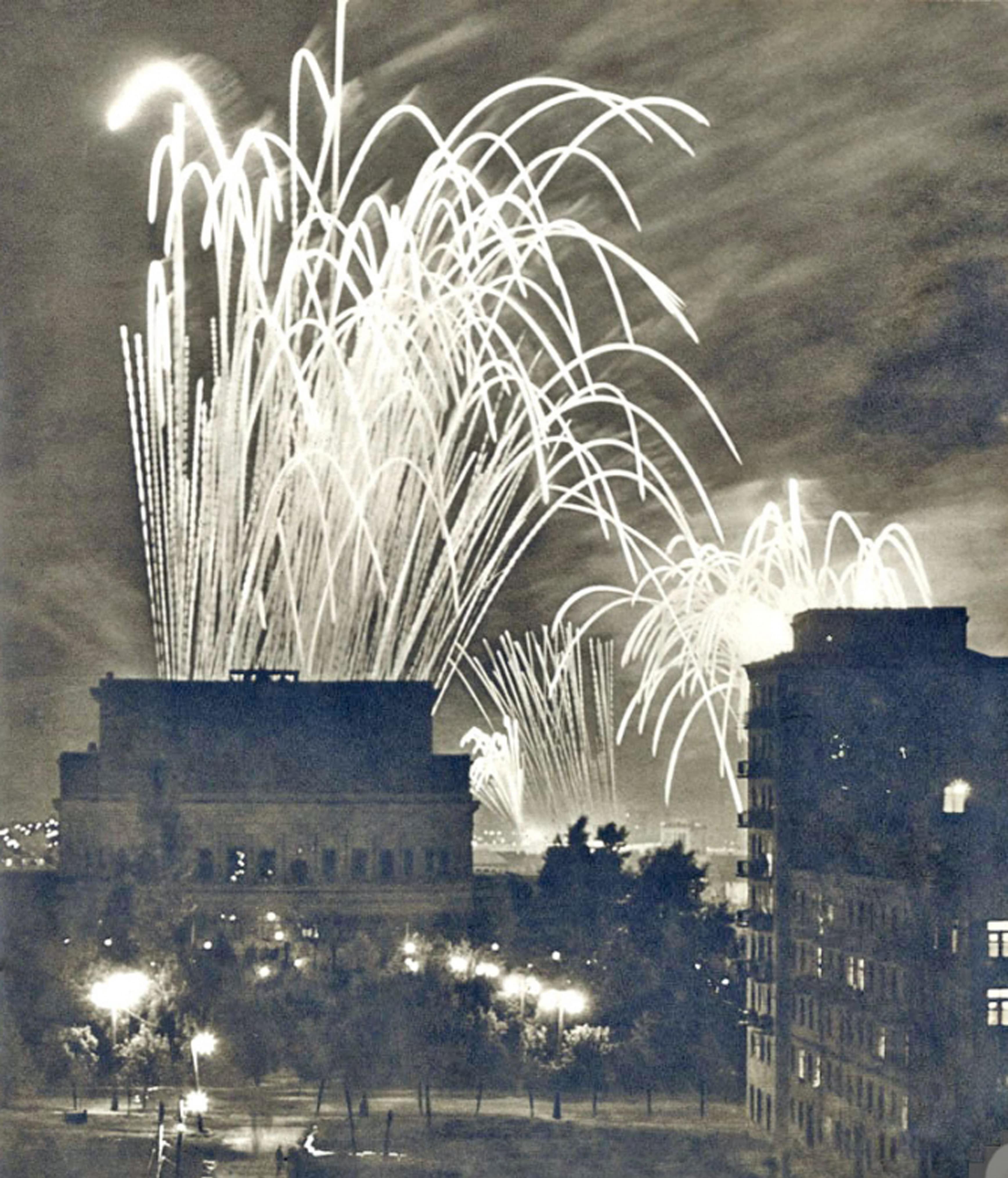 During the second half of the 1930s, many Armenian operas and ballets were being played, such “Gayane”, “Nazar the Brave” etc. The opera was active from its founding days in representing the sector a large choice of musical, aesthetical and educational presentation by divulging the best works from different periods and styles ranging from Armenian, Russian, Western European, Classical, as well as contemporary composers. Many singers and dancers have, from generation to generation, have improved by themselves within the Opera theatre, from which many of them have become world-renowned and famous later on.

The Opera’s latest presentations’ birth was notable with the discovery of newer talents: Tatevik Sazandaryan` master of musical theatre, Pavel Lisitsian` benefactor in singing and directing, Nar Hovhannisyan` incomparable bass, and also Mihran Yerkat` vocally and artistically talented. The most notable star that shone on the Opera stage was Gohar Gasparyan and her talent, who with her unique voice and virtuous technique brought her to international fame.

The ballet group was enriched due to the talents and selfless contributions of Lyubov Voynovashikanyan, Rusudana Tavrizyan, Silva Minasyan, Vanush Khanamiryan. What was inherited by them was new talents, new voices, who performed well-known opera characters and were played by Gohar Galachyan, Arshavir Karapetyan, Serguei Danielyan, Anzhela Harutyunyan, Elvira Uzunyan and others. Later on they were followed by Olga Gabayan, Henrik Alaverdyan, Barsegh Tumanyan, Vahan Mirakyan, Susanna Martirosyan.

At the same time, ballet was enriched as well. Prominent figures who contributed to the improvement of ballet were Vilen Galstyan, Bella Hovnanyan, Juliet Kalantaryan, Elvira Mnatsakanyan, Rudolph Kharatyan and others.

During the Armenian Art and Literature second Decameron in 1956 in Moscow, after a huge success Armenia’s main Opera theatre was awarded the highest nomination of Academician.

During the summer of 1970, for one month straight, the theatre presented around 24 plays in Sochi.

In 1983 the Opera celebrated its 50th anniversary jubilee, during which was presented international classical and operas and ballets (around 186 presentation), which as a result led to being awardedthe deep respect of the population of the Armenian Republic.

NEW SOAR IN THE OPERA THEATRE 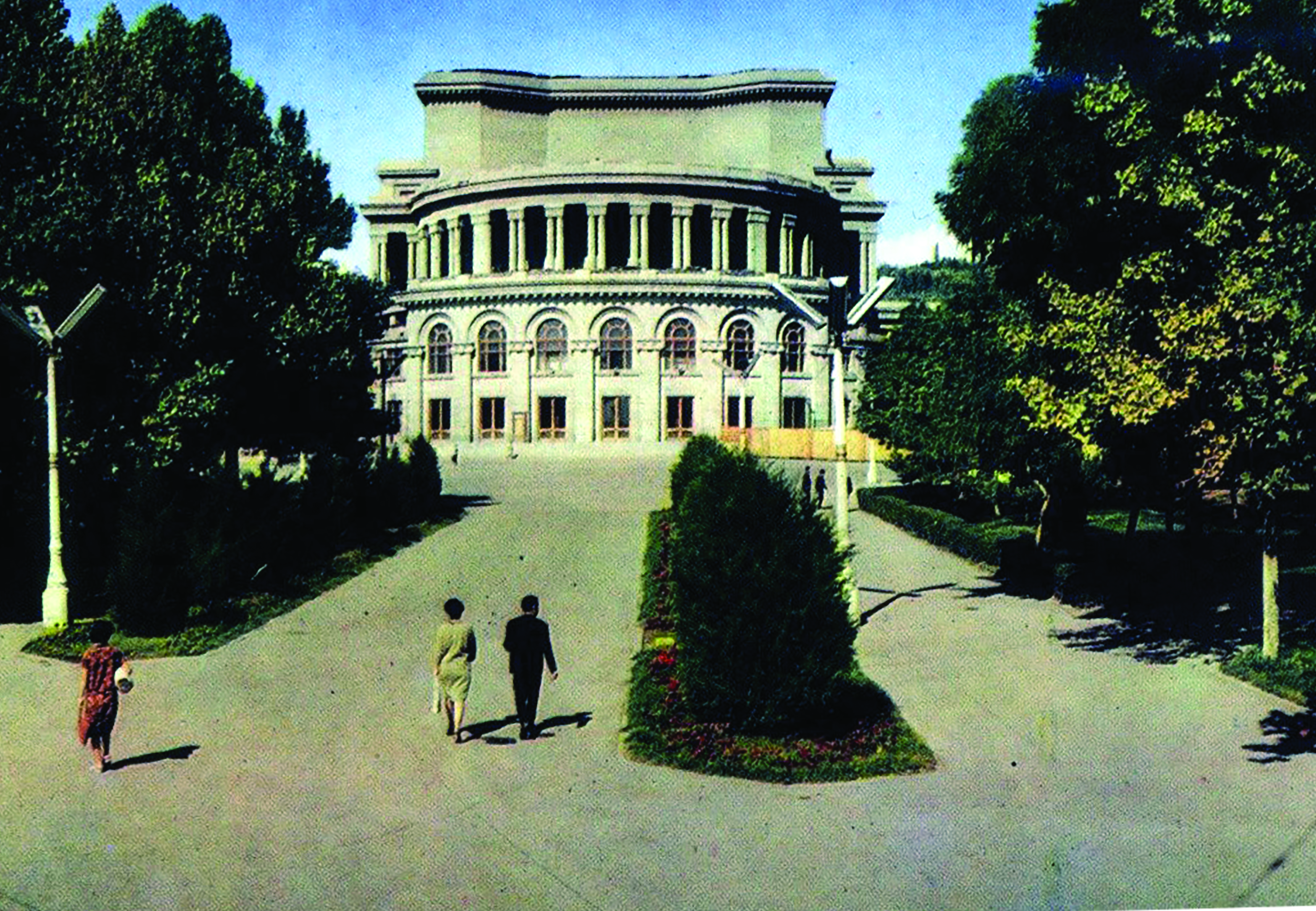 Today the traditions of the Opera Theatre continue with Acting director Karen Durgaryan.

Over the past year, several world-famous premieres took place in the theater: P. Tchaikovsky’s “Nutcracker”, S. Prokofiev’s “Romeo and Juliet”, restoration of S. Rachmaninoff’s “Symphonic Dances”, G. Verdi’s “La Traviata” and “Aleco” operas. The premiere of the opera “Soma: Ring of Fire” by A. Terteryan, one of the most renown Armenian composers, was also a long-waited event for the Theatre. The premiere of the ballet of the same name based on the drama “Old Gods” by L. Shant is expected this year. This series is to be continued. 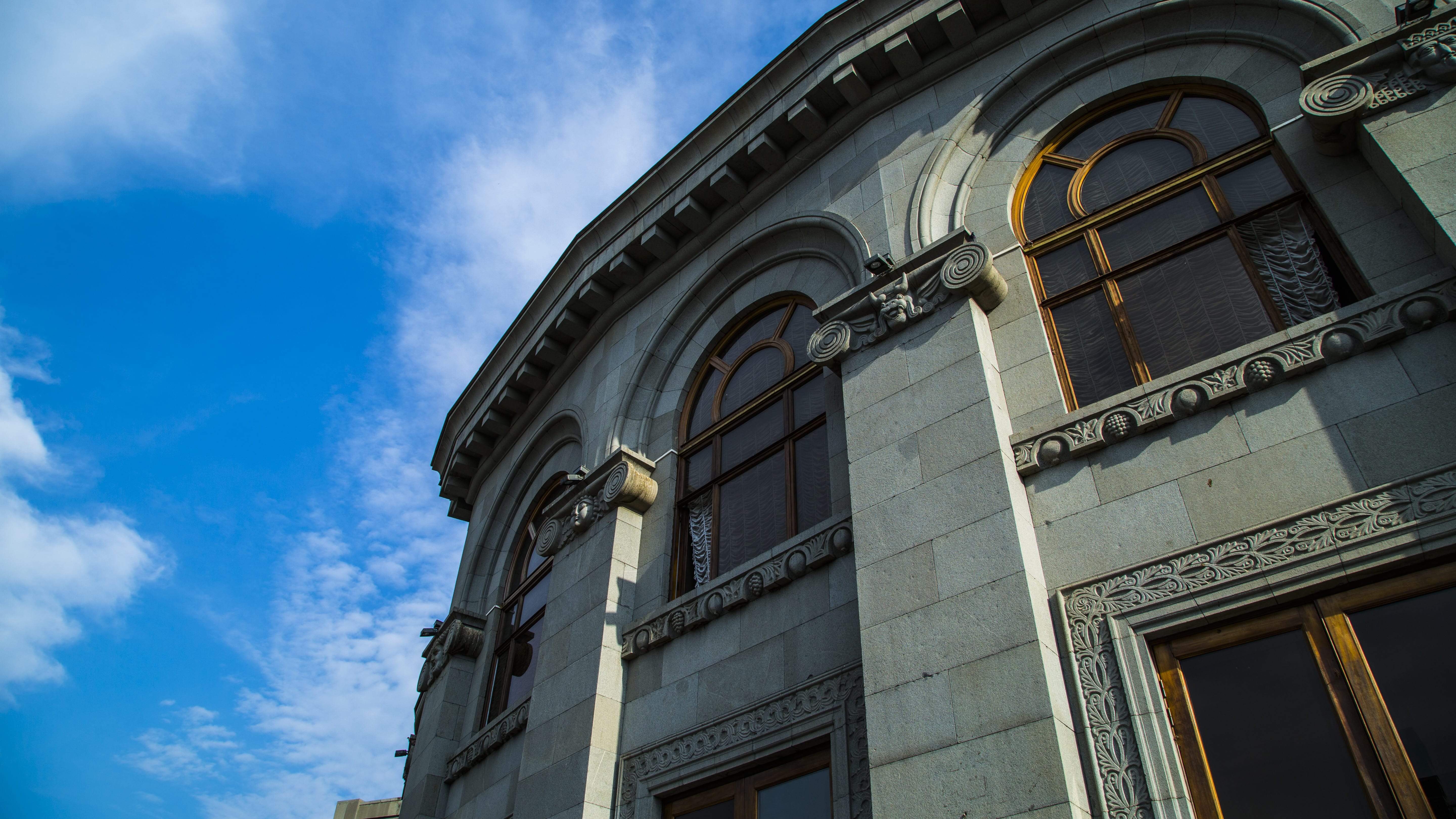 Armenian National Opera and Ballet Theatre  continues to contribute to culture and art to this day.

The Theatre had its unique place in the life of Armenian society and works on protecting it for centuries to come. By having such a heritage that was left to us by our nation’s titans` the theatre today continues the ideology of delivering to the art-lover high culture and educate a new generation of art lovers, to whom this theatre would become a prominent location.

During the last few years, we can consider it to be a time of further improvement for the theatre. The “Gayane” ballet was presented in its best way in 2004 with the sketches of Minas Avetisyan which were later restored by the theatre principal artist Avetis Barseghyan, as well as by Narek Avetisyan, with the supervising of Narek Avetisyan, son of great artist Minas Avetisyan (director Vilen Galstyan, conductor Karen Durgaryan). The ballet was successfully presented in Egypt, Greece, Turkey, Bahrain, United Arab Emirates. Famous stars were shining during the ballet, such as Zaven Harutyunyan, Maria Divanyan, Jacquelina Sarkhoshyan, Sona Arustamyan, Armen Gevorgyan, Karen Machkalyan, Levon Hambardzumyan.

The choir of the Opera and Ballet National Academic Theatre  is the pride of the Armenian opera, richness in our traditions and the singing culture in the Opera’s history.

At the beginning of the 30s, the choir is founded by V. Nikolski, which was invited to Armenia. He puts the foundations of the choir which had profound correlations with Russian choir traditions. With the improvement of the Republic of Armenia, national traditions start forming with the newer composers. Armen Tigranyan’s Anush is played (1932), where huge scale performances do not cause any difficulty to the choir. The same can be said to one of the difficult performing operas, Bizet’s “Carmen” (1959).

The choir participated to more than 50 plays, to 3-7 premiers every year. Its presentations in Leningrad and Moscow keep the spectators amazed with their professionalism and high responsibility.

The choir presented Bellini’s “Norma” for the first in the Soviet Union, which accepted with many ovations. The efforts of great composers K. Karapetyan and R. Ayvazyan were not in vain, for they elevated the choir to a new level.

It is impossible to not mention the role of famous conductor of the Republic of Armenia Hovhannes Chekijyan, who, together with the cappella, performed “Arshak the Second” Opera.

The playlist of the Opera is big, starting from Armenian, Russian and International plays to cantata and a cappella themed creation, which were always performed by the author’s language.

Many Armenian contemporary composers have brought their presence to the theatre with plays such as Eduard Sadoyan’s “Gregory the Illuminator” opera and Ashot Babayan’s “Spitak” theatrical symphony, as well as Avet Terteryan’s “Earthquake” (director` Levon Ivanyan, conductor` Ruben Asatryan) which was played with the request of the state, E. Hovhannisyan’s and A. Piazzola’s “Vartanank” and “Tango”. In 2010, Pergolez’s and Yo.S.Bach’s “Stabat Mater” and “Passions of Bach” were presented with the direction of Rudolph Kharatyan.

Such plays once again prove that the theatre can successfully realize large-scale projects. That is being confirmed year by year, during the Republic’s holidays, celebration, with the participation of the theatre’s choir, symphonic music band, soloists, and the ballet actors.

In order that the opera artist becomes reachable to the provinces of Armenia, plays were conducted in Gyumri, Spitak, Dilijan,Vanadzor.

The Opera theatre has, for many times, been present outside the borders of Armenia, on international stage, with the mission of making Armenian Classical Music known to the art lover and reaching new heights. During the last years the theatre has also reached to the provinces of Armenia.

Today, Armenia’s Opera and Ballet Theatre is living its advcancement period. Opera stars reaching international level, as well as famous ballet stars are now performing on Armenia’s stage. Armenia’s stars, in their turn, are from time to time found on international stages. The best proof is A. Khachaturyan’s “Gayane” ballet with its brilliant performance in St. Peterburg’s Marinsky theatre, where international ballet critics voiced their amazement. Opera and Ballet theatre is taking steps in order to expand its playlist by including other Armenian and non-Armenian operas and ballets to be presented in the repertoire.

This center of classical art, next to being an opera and ballet theatre, has also contributed to the analplerosis of international creations, to the inter-transparency between musical artworks. It also became an educational institution for opera and ballet artists, it helped to give birth to national creations, it brought international recognition and glory to the Armenian song, dance and to our culture in general.

The Theatre has given and continues to give values that are forever to be kept in our history. It has its place in the life of Armenian Society and will for sure work on protecting it by transmitting to the spectator high culture and by educating a new art loving generation, to whom the Opera theatre will become an important cultural institution.

About Us
Branding
Gallery
History 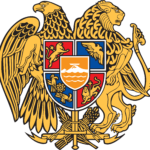 Ministry of Education, Science, Culture and Sport of RA

Armenian National Opera and Ballet Theatre thanks its Partners for Cooperation and for their Support.